I am a big fan of KJ Charles’ work. I originally discovered her after signing up for the Romance Package on audible on a whim. Quite a few of her books were available in that package, and I quickly devoured them all. When I ran out of the Romance Package books, I began to buy up everything else she had available.

KJ herself is amazing in interacting with her fans. She has a group on Facebook and posts often on Twitter!

It was reading her and Josh Lanyon’s work that really inspired me to write my own book! When I got the opportunity to read her newest novella, Unfit to Print, I jumped at the chance. I decided to take my time with it and enjoy it, reading one chapter a night.

Spoiler Alert: I loved it!!!

ON to the review!! 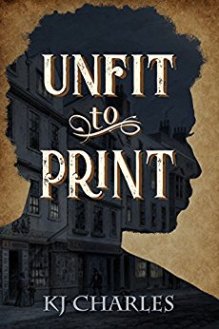 When crusading lawyer Vikram Pandey sets out in search of a missing youth, his investigations take him to Holywell Street, London’s most notorious address. He expects to find a disgraceful array of sordid bookshops. He doesn’t expect one of them to be run by the long-lost friend whose disappearance and presumed death he’s been mourning for thirteen years.

Gil Lawless became a Holywell Street bookseller for his own reasons, and he’s damned if he’s going to apologise or listen to moralising from anyone. Not even Vikram; not even if the once-beloved boy has grown into a man who makes his mouth water.

Now the upright lawyer and the illicit bookseller need to work together to track down the missing youth. And on the way, they may even learn if there’s more than just memory and old affection binding them together…

Unfit to Print
By: KJ Charles

First of all, let me start out by saying that I never thought I would answer a text message of “What’re you up to?” with “Reading about a Victorian Pornographer!” While that is a very basic and not-wholly-accurate description of this novella, it also isn’t entirely untrue.

Unfit to Print (titled by Sherene Khaw, a fellow fan in the KJ Charles Chat group on Facebook!) starts out in with Gil Lawless, a bookseller who specializes in illicit materials, at his older brother, Matthew’s funeral. We discover rather quickly that he isn’t exactly torn up inside about Matthew’s passing. After grudgingly agreeing to go through his brother’s papers and books, he discovers the shock of his life: respectable Matthew Lawes had one of the largest (illegal) pornography collections he had ever seen!

He also learns that when his father died (13 years earlier) he did not leave him without a penny and disown him as Matthew had said, but that Matthew had unlawfully seized Gil’s inheritance and forced him to take the last name of a bastard, as Gil had been born out of wedlock to a woman of color.

Vikram Pandey, a successful and well-educated Indian lawyer who was raised in England, is a crusader for other less fortunate Indian immigrants. When he ends up wrapped up in the case of a missing boy named Sunil Gupta, finds himself searching in less favorable parts of the city. It is in this search that he comes face to face with Gil Lawless, his boyhood love who he had presumed dead since his disappearance 13 years ago. Inevitably, Gil and Vikram soon become helplessly swept up in rekindling their boyhood romance and the case of the missing boy, Sunil.

Beautiful doesn’t even begin to describe it.

Without giving any spoilers, I will tell you that when you get to Chapter Five, you had better have some tissues ready. I don’t often cry when I read books, and I have read a thousand “sad story” backgrounds but KJ’s beautiful writing and her incredibly dimensional characters really struck home for me, and I wept upon reading Chapter Five.

“One bloody can, in the right company. And yes, since you ask, I do.” Gil gave him an evil grin. “If you can get the words out, I’m not ’embarking on negotiations to fellactio’ or whatever, so don’t even try.”

“Proper terminology is important,” Vikram said. “I may have to work up to it.”

The story is intriguing and perfectly paced, and the relationship between Gil and Vikram is heartbreakingly and heartwarmingly wonderful. There were times when I laughed (see the excerpt above), times when I cried (Oh god, Chapter Five…) and times when I really just felt my heart swell. While I always expect KJ’s romances to be beautiful and enjoyable, something about this one struck a chord in me that will linger for a long time. Beautiful doesn’t even begin to describe it.

Hell, even Satan the cat–YES, Satan!–was an amazing character and I found myself falling in love with him as well. And let me tell you, it is not easy to make a cat into a dimensional character in a non-fantasy setting!

Would I recommend this book to a friend? Absolutely!

Would I recommend this novella to a friend? Absolutely! Without hesitation, and I am recommending it to everyone reading this review and everyone who reads my Blog, Twitter, Facebook, etc. I really absolutely loved this story and am so happy I was able to read it and review it. I am not just recommending this to fans of male/male romance, either. This story is really a love story that can touch anyone’s heart and put a smile on your face. Please, do yourself a favor and add this novella to your “To Be Read” pile, you won’t regret it!

The TLDR version of this review is thus:

Sign Up for KJ’s Newsletter for some Free Reads!

(Some of) My Other Favorites by KJ Charles

A Charm of Magpies Series 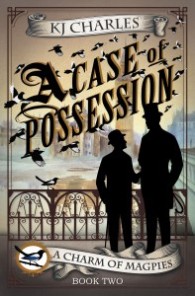 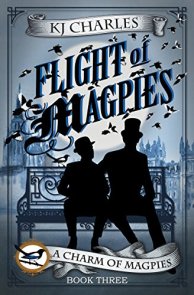 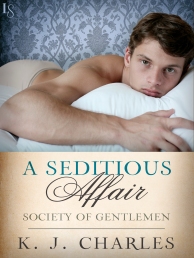 Sins of the Cities Series 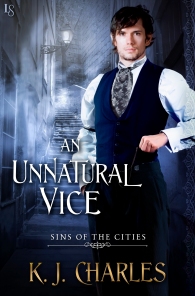